As new member of HYNES FAM, the first lesson is to know the whole story about it…this article is help me to understand — and in case you wanna know, all details below:

History:
Chief Mulrony O’Heyne, Lord of Aidhne, was father-in-law of Irish King Brian Boru, and fought and died with him while defeating the Vikings at the Battle of Clontarf in 1014 AD. For the next few centuries the O’Heynes were in constant battle with their Irish and Norman neighbors.

The Hynes territory was gradually taken by the invading Normans and English. Dunguaire Castle near Kinvara, built in 1520 AD, probably by Chief Owen “the Toothless” O’Heyne, was occupied by the Martyns of Tullira and was later inherited by Edward Martyn, a friend of local authors W.B. Yeats and Lady Gregory of Coole Park, both of whom wrote about Hynes ancestors.

The castle was restored and now hosts banquets nightly during the tourist season. The ruins of several other Hynes castles may still be found in the area, as well as the ruins of O’Heyne Abbey at the monastery of Kilmacduagh. The last known O’Heyne chief was Eoghan, or Owen, of Lydacan Castle in the 17th century. Later a number of Hynes became noted as Catholic priests. Hynes may now be found all over Ireland, especially in Galway and Clare counties, and across the world, with concentrations in Australia, Canada, UK and US.

Crest: A dexter arm, armed, embowed, the hand grasping a sword, all proper.

Origin of name: The Irish name of Hynes is an Anglicization of the original Irish surname, O’Heyne or heidhin, which dates back to when surnames first began being used. The name means “descendant of Eidhin”, referring to Eidhin, son of Cleirigh (ancestor of the O’Clerys), who lived in the 9th century. Eidhin’s grandson, Mulrony “of the Prayer” O’Heyne (Maelruanaidh na Paidri heidhin), was probably the first to use the name.
The name “Eidhin” may come from the Irish Gaelic word “eidhean”, which means “ivy”. During the English occupation of Ireland, the Irish were coerced into using English spellings, often by using a similar name existing in England. “O” and “Mac” prefixes were dropped and sometimes replaced by a final “s”, so  heidhin first became spelled O’Heyne, and eventually became Hynes, Hines, Hinds, etc.

Gaelic Name:  heidhin Tribe: The O’Heynes were a chief sept of the tuatha, or tribe, of  U  Fiachrach  Aidhne, which was the southern branch of the U Fiachrach (also  spelled  Hy Fiachrach), who were  the descendants of Fiachra Folt-leathan (of the flowing  hair),  brother of Niall of the Nine Hostages (ancestor of the O’Neills), who lived in the 5th  century.

The U Fiachrach Aidhne lived in the territory of Aidhne, in the southern part of what is now County Galway, and traced their descent from the 7th century King of Connaught, Guaire Aidhne “the Hospitable”, of whom many legends are still told. Other septs of the U Fiachrach Aidhne included the O’Shaughnessys, O’Clearys, Kilkellys, and some O’Cahans and Cahills.

HYNES Castle and others memorian building :

Dunguaire is the most famous Hynes castle, and the only one intact today. It was built  next to the site of the 7th century Rath Durlas, built by King Guaire Aidhne, the  Hospitable, there are other castles. The modern castle was built in 1520 AD by the  O’Heynes. It is uncertain which O’Heyne actually built it, but it was either Owen, Flann  or Edmund. It is located on a low promontory half a mile northeast of Kinvara, on an  inlet of Galway Bay, Aughnish Bay. It consists of a 65 foot fortified tower surrounded by a bawn, or stone wall, with a smaller tower at the southwest corner. A century later the castle passed into the hands of the Martyns of Tullira. Edward Martyn, who, along with W.B. Yeats and Lady Augusta Gregory of Coole Park, founded the Irish Literary Renaissance society and the Abbey Theatre, sold the castle 1912 to their friend and  fellow writer, Oliver St. John Gogarty.

Yeats also bought the de Burgo castle at Thoor Ballylee in 1916, where once lived Mary  Hynes, who was the subject of the famous Irish song M Eidhin by the blind  poet Antoine Raftery. Lady Gregory translated “Raftery’s Praise of Mary Hynes” and  Yeats wrote about the song in The Tower and other writings. Both wrote plays about  Hynes ancestors. In 1924 Dunguaire Castle was sold to Christabel Lady Ampthill, who  restored it. It was bought in 1972 by the Shannon Development Company, and it is  operated today by Shannon Heritage & Banquets, who host medieval banquets twice a  night from May to September. More information and photos may be found in “White Sheeted Fort” and “Dunguaire Castle”, by James P. Hynes, Kinvara Online, Global Golf IrelanD

Next to Dunguaire are the remains of the original 7th century fort of King Guaire Aidhne, the name of which means “strong fort”. It was the site of many legends, one of which had dishes floating on air out of the fort and down the road to the Burren, to Guaire’s cousin St. Colman MacDuagh. The fort was referred to in a poem by Giolla Iosa MacFirbis in 1417:

The white sheeted fort of soft stones
Habitation of poets and bishops.

The Hynes castle of Roo, or Curranroe, sat the head of Aughnish Bay near Corcomroe, just four miles from Dunguaire. Peter O’Heyne, son of Flan Boy O’Heyne of Kinturlough, was the last O’Heyne to live there, in the 17th century. The castle was destroyed by the great Lisbon earthquake on 1 November, 1755, at 9:40 a.m., which was felt throughout Europe. All that remains today is a mound on the seashore.

The name was originally Ard Ri Aidhne, or “High King of Aidhne”. The chief residence of the Lords of Aidhne until 1264 AD, when it was it was captured from the O’Heynes by William de Burgo, was site of a great defeat inflicted by the O’Heynes and their Gaelic allies against the Normans in 1225, which is mentioned in the song The West’s Awake. All that is left today is one large fragment of the keep built in 1250, on which is carved O’Heyne arms. The ruins of Ardrahan Castle may be found to the east of the road from Clarinbridge to Gort, just across the railway near the village. More information may be found at the County Galway web site.

Just four miles east of Kinvara on the N18 trunk road. The ruin is a large tower house which is well-preserved, despite the roof having fallen in. It was owned in the 16th century by the chiefs of the O’Heynes, including Owen Murtagh O’Heyne and Hugh Boy O’Heyne. Connor Crone O’Hynes lived in Lydacan Castle in 1612. A photograph of Lydacan Castle shows the stone tower.

The name means “Seat of the Town of O’Heynes”. This is an ancient hill fort near the shore close to the road to Ballyvaughn. Photographs of Cahir Baile Ui hEidhne show the fort walls with ruins of later dwellings.

The O’Heynes living here were descended from Aodh Buidhe (Hugh Boy), son of Flann O’Heyne, although Eoghan Buidhe (Owen Boy) may have been father of the first Dunowen Hynes. An older fort of great strength, built of stone without mortar, on the edge of a rocky cliff, stood next to the castle.

This castle lay the edge of the Aughnish Bay, opposite Dunguaire, at the site now occupied by Delamaine Lodge. Owned in 1641 by Edmund O’Heyne, the castle’s stones were later used as building material.

In 1133 AD, Turlogh O’Brien laid siege to an O’Heyne fort a few miles south of the City of Galway in Roveneaugh, whose name means “Red Beech”. He levelled the fort and destroyed the red beech tree under which the local kings were crowned. There the O’Heyne chieftains stood on a coronation stone during their inauguration, which was said to bear the marks of two feet. Later the place became the inauguration spot of the Burkes, when it was known as Cahir an Earla (the Earls’ Chair). The stone could still be seen in the 19th century but cannot be found today.

Pictures Journey on my Insta athinaike

New year busy busy work work 👏🏻 I am with Ch

C25K, I signed the plan and scratched the time fra

Some said: "Better to be the one who smiled than t

Some Majic from the Hogwarts castle✨✨✨ 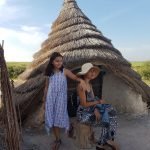